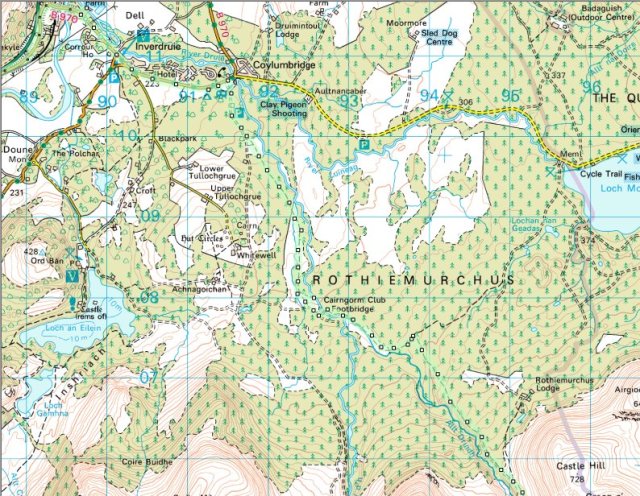 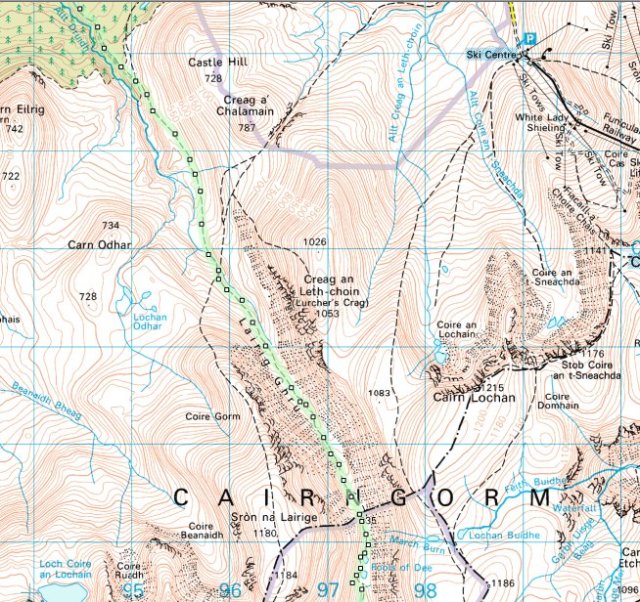 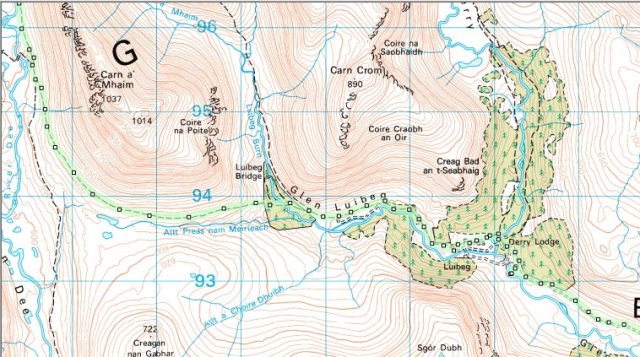 At 7.00 I was already up, and the weather at the time was ok.
It was a bit showery, but the weather was ok.
I had to make a decision as to final route.
The weather forecast was for wind and rain, and snow on the tops, with high winds.
Even if this did not happen, there was a chance that it would.
So after breakfast, I decided it was time to go, and packing up gear, left about 8.10.
I wandered down the road as far as the road that goes down to Glen Feshie.
It was time to make a decision.
I rang Avril at mission control.
The weather looked ok.
I had been through there before.
I was not going to Coire Dhondail.
I was going through the Larig Ghru.
Decision made!

As Avril said, “You’re the man on the ground, I am happy with your decision!”

Absolutely, and many thanks, and I was going that way.
So, off I went down to the track that heads to the Larig.
The weather here was ok, and I even managed to lose the Paramo jacket.
There is a very pleasant walk down through the forest to the Cairngorm Footclub Bridge.
I seem to remember seeing Morven near here, but I was too far away at the time to see.
Thus there was now only one route to do, and the game was on.
Just before the footclub bridge I was overtaken by some cyclists.
When I got there, they were trying to take a timed photo.
And this was also to take in the river view as well.
It was not going to work.
“Give us the camera boys” I said
“You’ll end up with a picture of 2 faces, half a bike, and his arse”
“Thanks”, they said, and I took some photos for them.
As they rode off, I headed over the bridge.
In the distance the Larig beckoned.

The view from the Cairngorm Footclub Bridge

A view to the dark moody clouds that were over the Larig. Even when it was sunny through the forest, the clouds were sitting over the mountains.

The view back from the start of the Larig Ghru

Looking up to the Larig before heading into the gorge
One of the great things about the Larig Ghru is the fact that it is impossible to get lost.
I say that, but back in 2006, the first time, and indeed the only other time I went through there, in ironically worse weather conditions, I was with my neighbour. Well, ex neighbour!
It had not been the most harmonious of crossings, and we are now divorced.
Anyway, at one point along the Larig, her had said to me.

How in the name off all that is holy, can you get lost along there?
What I actually said, I think was.
“Are you £^($ing nuts?“
You see why we are divorced eh!
Well that and the fact that I love my wife (but that is an earlier blog).
As I headed into the gorge proper, I spotted this chap ahead walking with no gear at all.
Is he MAD I thought to myself.
Anyway, I grabbed some water, and eventually caught up, to discover it was Robert!
Remember, he was with us earlier.
It transpired, that he was not walking with no gear.
He had lost his handkerchief, and had gone back to find it.
Quite a long way back to be honest.
I was also thrown by the fact he had a new jacket and some other new gear.
I feel a bit guilty now that I left his hanky by the side of the track. (Just joking! Or am I?)
I was double grateful though that he had completely resolved
all the issues with those ^&*(ing tension straps.
It’s a stunning gorge, the Larig.
An immense rift carved out with the massive Cairngorm Plateau on either side.

Robert in the Larig Ghru
The weather was actually good, and the wind was not high as expected.
I did not even need the jacket, just walking in a T shirt.
As we got near the small shelter at the top, it seemed a good time to stop for a lunch break.
Typically, this was when the squall from nowhere arrived with rain and sleet.
It did not last long, but we were grateful for that little shelter.
I had some rather fine smokey cheese from Tesco in Aviemore and also some rolls.
Excellent.
The squall passed as quickly as it had started, and soon we were over the top and heading back down again.
Last time I was here, there was quite a bit of snow, but this time only a few sporadic patches, and the going was good.
We could see someone walking towards us in the distance.
It turned out to be a German girl, with many knee supports.
She did not like boulders, and was asking if there were many.
“You are not going to like the other side” we said, “but they are really not that bad.”
She had come up from Bob Scot’s that morning.
That was my preferred destination, although if the weather had closed in I had corrour as my first option.
So off we headed, past the Pools of Dee

One of the Pools of Dee as we start to head down towards corrour. Still a long way to go.
The path down here in good weather, and this was make no mistake good weather, is easy going. Last time I was into driving rain and sleet, and ended up very grateful for the bothy.
That was back in 2006 when I had arrived wet and cold. This time it was a very pleasant walk down.
Great views of all the high peaks, and I was thinking to myself, the my original route would probably have been ok. Although by next morning, and hearing from others, I might have made the right decision.
There is always another time for high stuff.

I should have been the other side of that lot!
Trouble is, that when you are down there, you always want to be up there. Well I did!
BUT…. I was down here, and there was a way to go, so Robert and I carried on down towards corrour.

View towards Glen Geusachan from just past Corrour bothy
This was where I was going to exit tomorrow, but I was here today.
Just before here, we saw to challengers by the side of the track having a break.
This was Jane E and her partner Hoff.
Jane was resting, and Hoff was eating from an enormous Tupperware bowl of pasta.
This was a bit of a domestic situation apparently, because having carried it from Aviemore, he was not sharing it. Not ones to get involved, we didn’t.
He had met up with Jane in Aviemore, and they were walking through to Braemar together (it might have been Ballater).
So at corrour at about 4.30 or something like that, we decided to head on the Derry Lodge.
Indeed, Robert had a plan for Mar Lodge, there being a spare bed there tonight.
I thought about that, but I was already a day early, and was officially booked into Mar Lodge for Sat night.
Even if I stayed in my tent, or the bothy until midday tomorrow, I would still be arriving at Mar lodge a day early, so my intention was Derry Lodge.
It looked like it might rain, but it didn’t, and we made excellent speed round Glen Luibeg.

The river near Luibeg Bridge

The river just after Luibeg Bridge
As we arrived at Derry Lodge, there were a lot of people camping near the lodge. I had already decided to stay at Bob Scott’s bothy (assuming there was space), and there was. Loads of space

Rob just past Derry Lodge
At the lodge there were two Scott’s lads Rod and Sandy.
Indeed there was actually Rod and Ruby, and Sandy and Roxy.
Ruby being a chocolate Labrador, and Roxy, a highland terrier, or at least a terrier.

Rod, Sandy, Ruby and Roxy through a rather wet lens. It was not wet inside, but I had been outside and forgotten to clean it.
They had just started a brew and great chaps that they were, offered us a cup, and never one to pass up a brew like that, especially after a long walk, we accepted. Rob was umming and arring whether to stay, but in the end decided to head off to Mar Lodge.
The other chap that we met just before Derry Lodge also headed off, having just popped in for a look, not realising that the bothy was there.
Indeed a lot of people do not realise it is here, and it is a brilliant bothy, with a fantastic wood burning stove, sleeping platform, and outside toilet. Amazing considering how close it is to civilisation.

Rod and Ruby
So Rob had headed off, and I got my stuff sorted out.
As the evening wore on, the weather started to turn to rain showers.
A few assorted folk stuck there heads round the door, but none stayed.
Jane and Hoff, who we had left earlier finishing their rest also turned up.
They thought about staying inside, but for some reason, elected to put up their tent on the edge of the woods.
Looking at the weather, and since the forecast was for high winds, add to that, that there was a lot of dead wood high in the trees, I would not have camped, but there you are.
Indeed a few people were camped in the woods, under the trees.
It was quite (very) windy that night, and I hope that they were alright.
So after another brew, Jane & Hoff went off to tent, and we decided it was time to cook up some food.
Rod and Sandy offered me some of theirs, but I had extra food anyway, and needed to cook some of mine. This was their last night, having been here since the start of the week, doing assorted trips up to the plateau.

Roxy and Sandy’s feet
Rod was a big wood burning stove man, and as the weather got worse, and wind and rain increased outside, the stove provided a huge amount of heat.
Indeed, it was so hot that I slept on top of my sleeping bag.
Quite a long way from the chaps camping up high, who were by morning under a pile of snow. Even in the Feshie and Gelder Lodge it snowed.
Next morning you could see a good dump on the tops.
Well, we were snug as a bug, and spent a great evening chatting away.
Classic bothy night really, especially after the Whiskey came out.
I had half a bottle from Aviemore, and Rod and Sandy had just over half a bottle between them.
It was just blended whiskey, so leant itself rather nicely to being mixed with honey.
The evening sped by.
The whiskey flowed.
The stove burned brightly.
And we had a cracking time.
Indeed I think it was nearly 12.45 before I got off to sleep.
We’d solved all the world’s problems.
Rod and Sandy were a great couple of guys.
That’s what bothy’s are all about.
Job done!
A was really glad I was not in my tent.
Really Glad!